What do AIDS, CD-ROM, and NATO have in common? You will probably recognize them as being acronyms (initial letters from a set phrase pronounced as a separate word).
See what other abbreviations have sneakily been masquerading as English words:

Gestapo: Based on the German term for ‘secret state police’, Geheime STaatsPOlizei. Still scary but way easier to pronounce. 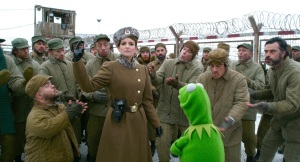 Muppet cleaned up version of the Gulag

Snafu: Situation  Normal. All Fouled Up. Feel free to insert the F curse word of your choice; this is a family blog!

Taser: One of the more surprising origin stories, this acronym is based on the favorite childhood novel of the NASA researcher who developed the device, Tom Swift and his Electric Rifle.

Historically, words like CIA or LOL were considered initialisms, not acronyms, because the abbreviations didn’t create a new word but only repeated the letters. Recent dictionaries have begun to categorize them together.

So Yahoo.com (Yet Another Hierarchal Office Oracle) for acronyms and I’ll TTYL.